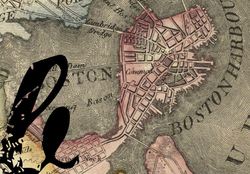 The history of Boston, Massachusetts plays a central role in both American history and the history of the telephone. Much of the work done by Alexander Graham Bell and Thomas Watson was conducted in or near Boston, a still growing hub in 1876. A number of famous buildings were built in Boston in the 19th century. The African Meeting House was dedicated in 1806. Park Street Church was dedicated in 1810. St Pauls Cathedral was dedicated in 1820. Boston Custom House was built in 1847. The Boston Public Library, the oldest free library in the USA, was founded in 1852.


However on November 9th, 1872 a fire began in a dry goods store and soon spread. The Great Fire of Boston destroyed 776 buildings and did millions of dollars worth of damage. The fire also killed 33 people. A few short years later, 1876, Alexander Graham Bell would put forth his idea for his voice-transmission device that would ultimately change not only Boston, but the world.