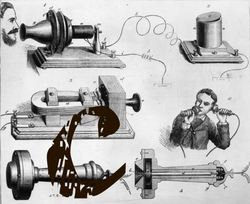 Patent caveats were a form of legal documentation that could be filed with the patent office of the United States, however, they are no longer in use. Used from 1836 to 1909, they would be formally abolished in 1910 by the U.S. Congress after determining their potentially biased nature.

A patent caveat was similar to a patent application and would often include elements such drawings and descriptions. The patent caveat, however, did not include any claims which one finds in the typical patent application. Rather the patent caveat  was a legal notice of the intention to apply for a patent at a later stage. According to the Guide to the Practice of the Patent Office 1853, the primary objective of a caveat was to prevent the issuing of a rival patent for the same invention to a subsequent inventor. If the two patent applications claimed the same invention, an interference would then be declared and neither patent could be issued until it was determined which was submitted first, or in other words, who was the first to invent.  Perhaps the most famous example of such a conflict was in 1876, when Elisha Gray filed a patent caveat and Alexander Graham Bell filed a patent application on the same day, both relating to the improvement in telegraphy. Gray would later abandon his patent caveat, but the case was extremely controversial and remains so to this day.