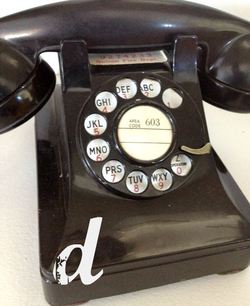 Henry Dreyfuss, a renowned industrial designer, dramatically improved the appearance, feel, and usability of dozens of consumer products including vacuums, cameras and telephones. In 1937, Western Electric and the Bell System introduced the 302 desk set, created by Dreyfuss. The shell of the 302 was intended to be cast out of metal. However, in 1941, the critical war-time need for metal caused Western Electric to retool the 302 and mold it using thermoplastic.

The 302 was the first telephone containing all of its circuitry within the base and not requiring a separately mounted apparatus box for the ringer. Most of the Model 302 sets were issued in black. Later, after the discovery of plastic, sets were also available in five colors ivory, peking red, gray green, dark blue, old rose.

The WE 302 appeared in many films from the time of its introduction through the 1960s and was ubiquitous in television shows of its time, such as the popular 1950s  situation comedy, I Love Lucy, starring Lucille Ball. Thus, it is sometimes called the Lucy phone by modern collectors as a memorable way to refer to this particular model.