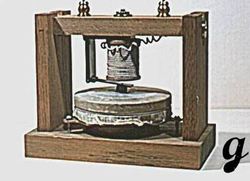 The Gallows Model, as it is referred to by historians due to its similarity to the hangman's scaffold, was Alexander Graham Bell’s first attempt to produce a speaking telephone. Built by his assistant, Thomas Watson, it was based on a crude drawing provided by Bell. In theory, the Gallows Model worked by projected sound which bounced from its armature glued to a parchment membrane or diaphragm. However, Bell and Watson would soon realize that the sounds heard from the instrument were not discernible.

Bell would attempt another experiment about a month later. With another two Gallows Models and several battery cells connected together, the original experiment was repeated, but with the same disappointing results. Technically, those Gallows Models should have worked, and, ironically, models made years later actually did work. The problem with the two original versions was not of design, but rather of implementation. Despite Bell's failures with the Gallows Models, he was confident in his abilities to send "vocal sounds" over a wire.