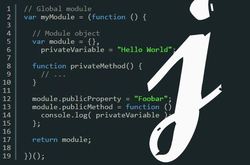 Many would argue that without the telephone, we would not have the computer, much less the internet.

While Alexander Graham Bell relied on sound technologies to aid him in his research, today’s programmers rely on various computer languages to communicate with machines. JavaScript is a programming language used to make web pages interactive. For example, is often used to create online polls and quizzes.

JavaScript support is built directly into all major web browsers, including Internet Explorer, Firefox and Safari. Provided that you are using web browsers that support JavaScript and that you have JavaScript enabled, then it will run when you visit a particular web page.

While the telephone industry creates thousands of jobs, today’s most sought after profession is that of computer programmer. Programming is highly detailed work, and it usually involves fluency in several languages. Projects can be short and require only a few days of coding, or they can be rather long, involving years of ongoing work.

Between 2012 and 2022, the Bureau of Labor Statistics projects employment for the programming industry to grow nearly 9 percent. Because of its strong continued growth, computer programming is one the most sought after jobs of 2015.