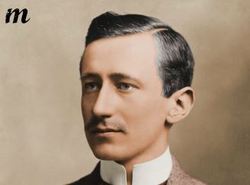 During his early years, Guglielmo Marconi, an Italian inventor and engineer, had an interest in science and electricity. Marconi would later develop, demonstrate and market the first successful long-distance wireless telegraph and in 1901 broadcast the first transatlantic radio signal. While Amos Kendall's contributions to the telegraph would, in essence, shrink the Nation, Marconi radios ended the isolation of ocean travel. In fact, Marconi's invention would save hundreds of lives, including all of the surviving passengers from the ill-fated, sinking Titanic. In 1909 he shared the Nobel Prize in Physics for his radio work.

Note: Marconi was offered free passage on Titanic before she sank, but had chosen another ocean liner three days earlier. It was later explained that Marconi had paperwork to do and preferred the public stenographer aboard that vessel. That choice, most likely, saved his life.
.
New Hampshire Telephone Museum
One Depot Street - PO Box 444 - Warner NH 03278
info@nhtelephonemuseum.org - 603.456.2234
Copyright © New Hampshire Telephone Museum 2021. All rights reserved.
Privacy Policy