Abacus
The abacus (plural abaci or abacuses), also called a counting frame, is a calculating tool that was in use centuries before the adoption of the written modern numeral system and is still widely used by merchants, traders and clerks in Asia, Africa, and elsewhere. Today, abaci are often constructed as a bamboo frame with beads sliding on wires, but originally they were beans or stones moved in grooves in sand or on tablets of wood, stone, or metal. The user of an abacus is called an abacist.

The period 2700–2300 BC saw the first appearance of the Sumerian abacus, a table of successive columns which delimited the successive orders of magnitude of their sexagesimal number system. Some scholars point to a character from the Babylonian cuneiform which may have been derived from a representation of the abacus.  It is the belief of Old Babylonian scholars such as Carruccio that Old Babylonians "may have used the abacus for the operations of addition and subtraction; however, this primitive device proved difficult to use for more complex calculations".
Around the world, abaci have been used in pre-schools and elementary schools as an aid in teaching the numeral system and arithmetic.

In Western countries, a bead frame similar to the Russian abacus but with straight wires and a vertical frame has been common. It is still often seen as a plastic or wooden toy.
​
This type of abacus uses a row of 10 beads to represent arithmetical columns; thus the top row represents units, the second, tens, the third, hundreds, and so on. Most of these abaci consist of 10 rows, thus count up to 11,111,111,110.

The  (TRS-80; later known as the Model I to distinguish it from successors) is a desktop microcomputer launched in 1977 and sold by Tandy Corporation through their Radio Shack stores. The name is an abbreviation of Tandy/Radio Shack, Z-80 microprocessor. It was one of the earliest mass-produced personal computers.
​
By 1979, the TRS-80 had the largest selection of software in the microcomputer market.
In mid-1980, the Model I was discontinued, primarily due to stricter FCC regulations on the massive radio-frequency interference it caused in surrounding electronics.

IBM PC
​
When the IBM Personal Computer (IBM 5150) was introduced to the world 34 years ago, it was dramatically clear to most observers that IBM had done something very new and different. Here you had a large company, steeped in tradition, that had been willing and able to set aside its "business as usual" methods to produce in volume a highly competitive, tiny computer of top quality, intended for both consumers and businesses. And IBM was able to do all that and roll out its first PC in just one year.
It wasn't that long before the August 1981 debut of the IBM PC that an IBM computer often cost as much as $9 million and required an air-conditioned quarter-acre of space and 60 people to run and keep it loaded with instructions.

The IBM PC changed all that. It was a very small machine that could not only process information faster than those ponderous mainframes of the 1960s but also hook up to the home TV set, process text and store more words than a huge cookbook -- all for a price tag of less than $1,600.

Though personal computers of various types had been spawned by and built for hobbyists, IBM's new offering was also a business tool with advanced features to immediately make it a very attractive offering for a variety of users. The announcement of the IBM Personal Computer signaled the company's determination to compete in the emerging and growing segment of the information processing industry in which PCs were soon to become general business machines.
​
In short, the introduction of the IBM Personal Computer a quarter-century ago set a worldwide personal computing standard and helped to establish a multibillion-dollar industry. 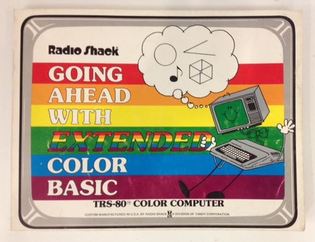 In today's environmentally-aware culture, many consumers opt for a paper-free world. Manufacturers are in agreement. Companies can save a tremendous amount of money by simple not printing manuals.

That is quite different than in the past when a great deal of printed materials accompanied each device, whether that was a computer, printer or any other new technology hitting the market.

This Radio Shack book is a perfect example, weighing in at approximately 2 pounds and measuring 1.5 inches thick.

Commodore VIC 20 Computer, Keyboard, Tape Drive
​
Commodore Business machines, famous for their PET computers with integral displays, introduced the VIC 20 in January 1981. This was a color computer for $300 designed to display on Channel 3 or 4 of a TV. The machine also had composite A/V outputs for improved display quality on an A/V monitor. The machine contained 5 K of RAM expandable to 32 K and used the same 6502 processor found in the Apple I-II machines.

Soon, a wide variety of ROM cartridges including terminal emulators and "The Quick Brown Fox" word processor gave the machine easy access to programs without the long loading time of the cassette tape interface on the Commodore PET computers.
​
As time went on Commodore reduced the price of the VIC 20, and in January 1982 introduced the VIC Modem, a compact 300 baud unit priced at $110 that attached to the modular handset cord (not the wall cord) of standard telephones. A VIC 20 with this modem and a terminal emulator ROM cartridge became the cheapest way to access early on-line information services like CompuServe and The Source.

Acer Notebook Computer
​
Acer is a Taiwanese company founded in 1976 under the name Multitech.  They changed their name to Acer in 1987. The company has its headquarters in the city of Xizhi, New Taipei, Taiwan.

For years now, that’s been a widely popular stance. It’s led to educational initiatives such as the Hour of Code (offered by Code.org) and Code Year (Codecademy).

Even President Obama has voiced his opinion on the matter issuing a YouTube video in which he urged young people to learn programming. ”Learning these skills isn’t just important for your future, it’s important for our country’s future”, he urged.

“Once upon a time, knowing how to use a computer was virtually synonymous with knowing how to program one. And the thing that made it possible was a programming language called BASIC” (Harry McCracken, Time). The BASIC (Beginners All-Purpose Symbolic Instruction Code) programming language was born in 1964 at Dartmouth College where it was invented by John G. Kemeney and Thomas E. Kurtz.

Throughout the 1970s and early 1980s, when computers became a part of the American home, the BASIC language offered as much benefit as any other technological advancement.
​
Today, we expect computers and phones to respond instantly to our instructions. It has been said that that era of instant gratification began with  Kemeny and Kurtz language creation.