​Increasing traffic on single track railroad lines required more efficient operation and flexibility.  The ability for a single dispatcher to issue train orders was enabled by the invention of the electric telegraph in the 1840s.  With the introduction of the telegraph, a more sophisticated system became possible because the telegraph provided a means to transmit messages faster than the trains moved.
​
The telegraph could be used to communicate the arrival and departure of trains at stations along railroad lines. If a train was running behind schedule, the points where it would meet other trains could be safely moved to other sidings, allowing the other trains to continue and avoid long delays, providing more efficient operation along the railroad line. 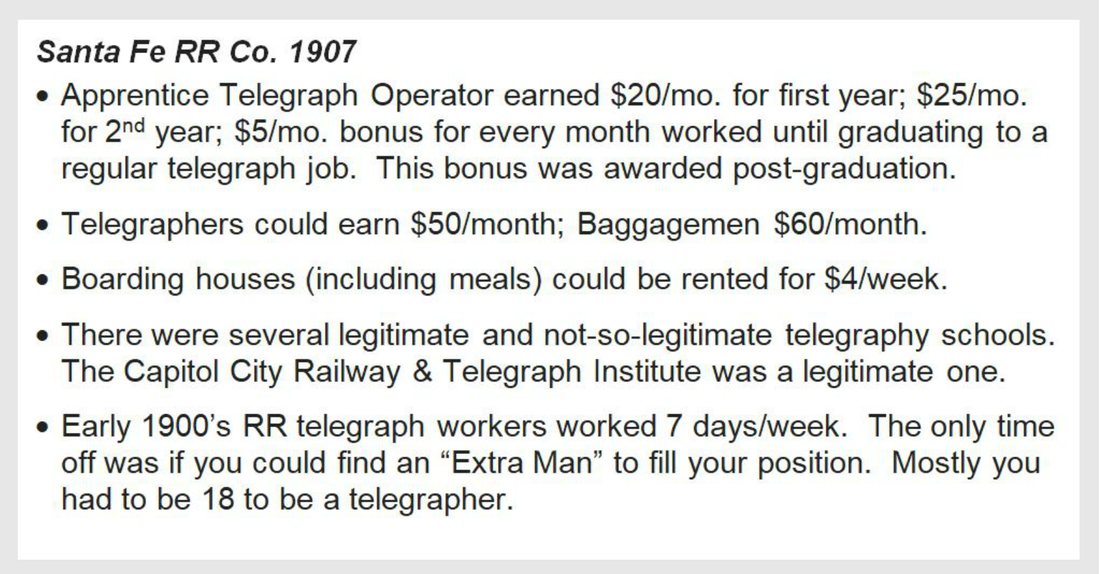 The Order of railroad telegraphers

A meeting of telegraphers representing the major U.S. railroads met in Cedar Rapids, Iowa, on June 9, 1886. Organized by Ambrose D. Thurston (1852–1913), publisher of the trade journal Railroad Telegrapher, in Vinton, Iowa, the group formed the Order of Railway Telegraphers of North America, with membership limited to telegraphers who were or who had been employed in railroad service. The Order of Railway Telegraphers was initially intended to be more of a fraternal organization than a trade union; it was ideologically closer to the conservative railroad unions than the more militant commercial telegraphers. Initially, its constitution forbade members to strike except in extreme conditions. By March 1887, the union had attracted 2250 members; the number of members grew to 9000 by March 1889.
In the early 1890s, members began to demand that the union take a more assertive role in negotiating wages and working conditions with the railroads. In 1891, the constitution was changed to explicitly make the ORT a "protective" organization, with the right to call strikes if negotiations with the railroads were unsuccessful; at the same time, the name was changed from "Order of Railway Telegraphers" to "Order of Railroad Telegraphers."

With the entry of the U.S. into the First World War, the railroad and telegraph industries were placed under government control. On December 26, 1917, the United States Railroad Administration (USRA) took control of the railroads.  The USRA was generally supportive of the interests of the union members; during the period of nationalization, railroad operators were limited to an eight-hour workday and the ORT was granted collective bargaining capability on a national level.   By 1917, ORT membership had grown to 46,000.

Membership in the ORT began to decline after the stock market crash of 1929, due not only to economic conditions but also to the increasing use of centralized traffic control, which no longer required the presence of a telegrapher in each station. The membership fell to 63,000 in 1929, and continued to fall throughout the Depression years of the 1930s. As a result of the declining membership and the loss of revenue from dues, the ORT was forced to suspend payment of pensions to retired members through the mutual benefit program.

The decline of the railroad industry in the 1950s and 1960s led to layoffs and discharges of ORT members. When the ORT attempted to protect its members' jobs by demanding the right to veto job cutbacks, it was accused of "featherbedding," requiring the employment of unnecessary workers, by railroad executives. The ORT called a strike in 1962 to protest layoffs of 600 telegraphers on the Chicago & Northwestern Railroad. A mediation board created by President John F. Kennedy found in favor of the railroad in October 1962, calling the layoffs justified and denying the union the right to veto layoffs. However, the railroad was required to give 90 days' notice to terminated employees, and to pay laid-off telegraphers 60 percent of their annual salary for as much as five years.

In 1965, the ORT changed its name to the Transportation Communications Employees Union; that union was merged into the Brotherhood of Railway & Airline Clerks, Freight Handlers, Express & Station Employees (BRAC) in 1969. At the time of the merger, the ORT had about 30,000 members. In 1985, BRAC chose to revive the TCU identity, and in July 2005, the "new" TCU affiliated with the International Association of Machinists.

The full merger occurred in January 2012.

​The train order provides the means to deal with changes in operating conditions as they arise. Orders modify the established timetable. Among the functions a train order can perform are:

Click on the button below to see how it was done!
Hooping Up a Train 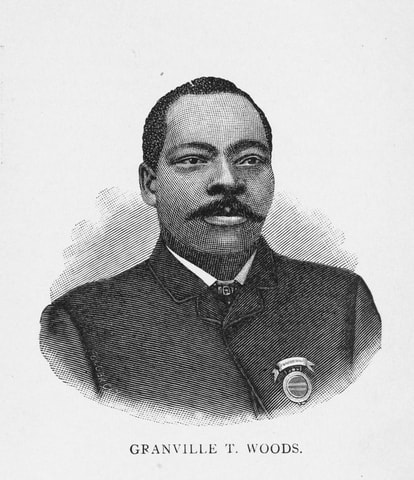 Granville Tailer Woods (April 23, 1856 – January 30, 1910) was an inventor who held more than 60 patents in the U.S.  He was the first American of African ancestry to be a mechanical and electrical engineer after the Civil War. Self-taught, he concentrated most of his work on trains and streetcars.  He was referred to by some as the "Black Edison".  One of his notable inventions was the Multiplex Telegraph, a device that sent messages between train stations and moving trains. His work assured a safer and better public transportation system for the cities of the United States.  The railroad telegraph transmitted messages through static electricity between moving trains.

Born on April 23, 1856 in Columbus, Ohio, Woods was formally educated until the age of ten when he took a job in a machine shop. In 1885 Woods began working on what he called "telegraphony," a device that allowed users to switch between two forms of communication, voice or Morse code, to transmit messages.

Based on "telegraphony," Woods invented the induction telegraph in 1887 (US Patent No. 373,383). Prior to its creation, moving trains were unable to communicate with each other or with rail stations, resulting in dangerous situations. The induction telegraph used static electricity from the existing telegraph lines running parallel to the train tracks, making messaging possible between moving trains and rail stations.  It allowed communications between train stations from moving trains by creating a magnetic field around a coiled wire under the train.
​
Woods' later inventions dealt with more efficient use of electricity. He created an overhead conducting system for rail and trolley cars to run on electric current instead of steam power. In addition, he devised a third rail that is still often used on many rail lines; the third rail carries electricity via electromagnetic switches and pulls trains along. He also improved the automatic air brake used by railroad cars. His patents were eventually bought and used by General Electric and the Westinghouse Air Brake Company.

​By the 1970s – with the advent of radio communications – timetable and train order operation began to fall out of favor as direct traffic control and centralized traffic control (CTC) became more common on major carriers. CTC enabled dispatchers to set up meets remotely and allowed trains to proceed entirely on signal indication. Where signals were not present, DTC and the related track warrant control allowed dispatchers to directly inform trains what they were to do instead of needing to work through intermediaries or have the train crews figure things out for themselves.

How it is done now

Positive Train Control
Positive Train Control (PTC) is an advanced system designed to automatically stop a train before certain accidents occur. In particular, PTC is designed to prevent:
PTC does not prevent vehicle-train accidents at railroad crossings, or those due to track and equipment failures.
When fully deployed, the nationwide PTC system will accurately determine a train's location, direction and speed via the following process:
PTC Background and Testing
The Rail Safety Improvement Act of 2008 (RSIA) requires railroads to install PTC systems on tracks that carry passengers or poison- or toxic-by-inhalation (TIH) materials. Based on a January 2012 final Federal Railroad Administration (FRA) rule, the Association of American Railroads (AAR) estimates that PTC technology will be deployed on about 63,000 miles of U.S. freight rail lines. As originally written, the RSIA mandated that PTC be put into service by the end of 2015. Recognizing the challenges of this new technology, in December 2015 Congress extended the PTC implementation deadline to Dec. 31, 2018.

Implementing PTC properly requires integrating thousands of components across the telecommunications spectrum, such as GPS, Wi-Fi, radios, cellular technology, antennae, base stations and first-of-its-kind software that decides when to slow or stop a train – across Union Pacific’s network.

PTC must be "interoperable" – passenger, commuter and freight trains must be able to seamlessly communicate and operate across all railroad systems. Any breakdown in interoperability presents unacceptable risks to the safety and efficiency of America's rail network. Additionally, the Federal Railroad Administration (FRA) must review each railroad's PTC safety plan and certify the PTC system after development and testing of components is completed. This certification is mandatory before PTC-controlled trains can go into service.

About 40 railroads are developing and installing PTC systems around the country. 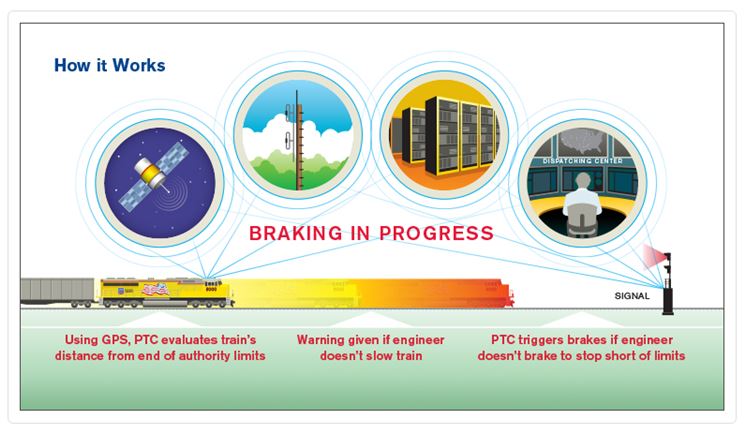