In 1837, the Post Office Department began appointing "route agents" of its own on some lines.  The first recorded agent was John E. Kendall, who rode from Philadelphia to Washington, D.C.  Others soon followed, and each route agent was given a hand postmarker to stamp local letters received along the way.
​
An Act of July 7, 1838, designated all United States railroads as post routes, and railroad mail service increased rapidly.
On August 28, 1864, the first U.S. railway post office (RPO) route was established officially when George B. Armstrong, Chicago’s assistant postmaster, placed a car equipped for general distribution in service between Chicago and Clinton, Iowa, on the Chicago and North Western Railroad.
In 1889, the Overland Transcontinental line, which extended the NY & Chicago service westward to San Francisco, became the first transcontinental Fast Mail to the Pacific.
When railway mail service began, the cars were equipped primarily to sort and distribute letter mail. By about 1869, other mail was being sorted. Parcel Post service, added in 1913, soon outgrew the limited space aboard trains. Terminals, established adjacent to major railroad stations, allowed parcels to be sorted then loaded into mail cars and RPOs for transport to cities and towns.
In 1930, more than 10,000 trains moved mail. Following passage of the Transportation Act of 1958, which allowed the discontinuance of money-losing passenger trains, mail-carrying passenger trains began to decline rapidly. By 1965, only 190 trains carried mail.
On April 21, 1968, Assistant Postmaster General Hartigan issued a news release concerning RPO service. It stated that RPO cars on 162 passenger trains in the nation would be phased out of service prior to the end of the year, affecting 2,224 postal workers.
By 1970, the railroads carried virtually no First-Class Mail.
On April 30, 1971, the Post Office Department terminated seven of the eight remaining routes. The last railway post office, which operated between New York and Washington, D.C., on Penn Central/Conrail, made its final run on June 30, 1977.
Highway and air congestion and an increase in the weight of catalogs and advertising mail during the 1980s led to renewed rail use. Amtrak carried mail on many trains, and freight trains pulled flatcars holding trailers full of mail. In 1993, Amtrak and the Postal Service reintroduced the RoadRailer®, special intermodal equipment that could travel on highways and on rails without having to be hoisted onto a railroad flatcar. ​
Following the terrorist attacks of September 11, 2001, rail transportation of mail helped close the gap caused by temporary disruptions to commercial air service.
​
Amtrak stopped carrying mail in October 2004, although the nation’s freight railroads continue to carry mail through their intermodal service. 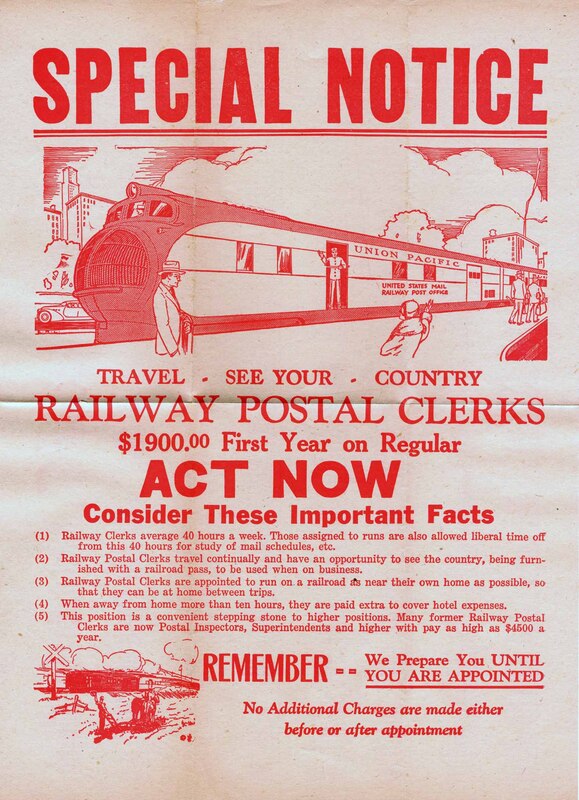 The duties of the route agent included accompanying the mails to the train and receiving them in his compartment (or in his part of the baggage car). Right before the departure of the train, he opened the letter box on the depot platform and took out late-mailed letters.
Before 1847, when stamps were introduced, the route agent made out waybills for collection upon delivery of the letters. The letters were then tied with the other letters in brown wrapping paper and addressed to a DPO (Distribution Post Office); these packets so wrapped were referred to as "mails."  DPOs were important post offices in centers of large areas, counties, or states, to which mail was sent for distribution.

It was dangerous work