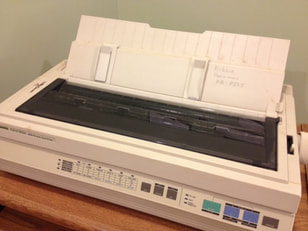 ​Dot Matrix Printing
​
A type of printer that produces characters and illustrations by striking pins against an ink ribbon to print closely spaced dots in the appropriate shape. Dot-matrix printers are relatively expensive and do not produce high-quality output. However, they can print to multi-page forms (that is, carbon copies), something laser and ink-jet printers cannot do.

Several manufacturers implemented color dot-matrix impact printing through a multi-color ribbon. Color was achieved through a multi-pass composite printing process. During each pass, the print head struck a different section of the ribbon (one primary color). For a 4-color ribbon, each printed line of output required a total of 4 passes. In some color printers, such as the Apple Image Writer II, the printer moved the ribbon relative to the fixed print head assembly. In other models, the print head was tilted against a stationary ribbon.

Due to their poor color quality and increased operating expense, color impact models never replaced their monochrome counterparts. As the color ribbon was used in the printer, the black ink section would gradually contaminate the other 3 colors, changing the consistency of printouts over the life of the ribbon.
​
Compared to laser and ink-jet printers, dot-matrix printers are notorious for making a racket. 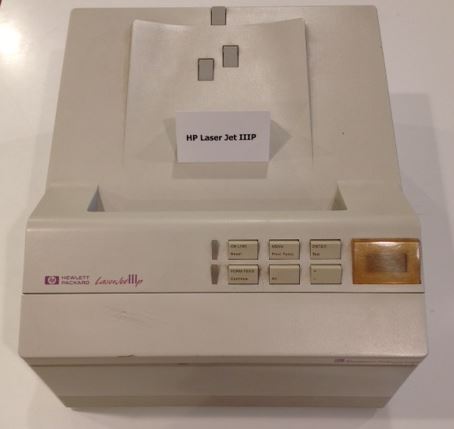 Laser printing is an electrostatic digital printing process. It produces high-quality text and graphics (and moderate-quality photographs) by repeatedly passing a laser beam back and forth over a negatively charged cylindrical drum to define a differentially-charged image. The drum then selectively collects electrically charged powdered ink and transfers the image to paper, which is then heated in order to permanently fuse the text and/or imagery.

First-generation machines had large photosensitive drums, of circumference greater than the loaded paper's length. Once faster-recovery coatings were developed, the drums could touch the paper multiple times in a pass, and therefore be smaller in diameter.
​
Laser printers brought exceptionally fast and high-quality text printing, with multiple fonts on a page, to the business and consumer markets. No other commonly-available printer during this era could also offer this combination of features.

1976
The first commercial implementation of a laser printer was the IBM 3800. It was designed for data centers, where it replaced line printers attached to mainframe computers. The IBM 3800 was used for high-volume printing on continuous stationery, and achieved speeds of 215 pages per minute (ppm), at a resolution of 240 dots per inch (dpi).
1979
Inspired by the Xerox 9700's commercial success, Japanese camera and optics company, Canon, developed a low-cost, desktop laser printer: the Canon LBP-10. Canon then began work on a much-improved print engine, the Canon CX, resulting in the LBP-CX printer.
1981
The first laser printer designed for office use – the Xerox Star 8010 – reached the market. The system used a desktop metaphor* that was unsurpassed in commercial sales, until the Apple Macintosh. Although it was innovative, the Star workstation was a prohibitively expensive (US $17,000) system, affordable only to a fraction of the businesses and institutions at which it was targeted.
1984
The first laser printer intended for mass-market sales – the HP LaserJet – was released in 1984; it used the Canon CX engine, controlled by HP software. The LaserJet was quickly followed by printers from Brother Industries, IBM, and others.
1985
Apple introduced the LaserWriter (also based on the Canon CX engine) but used the newly released PostScript page-description language. Up until this point, each manufacturer used its own page-description language, making the supporting software complex and expensive. PostScript allowed the use of text, fonts, graphics, images, and color largely independent of the printer's brand or resolution.
PageMaker, written by Aldus for the Macintosh and LaserWriter, was also released in 1985 and the combination became very popular for desktop publishing. ​
​The Xerox Company used to be known as the Haloid Company almost 100 years ago, but in 1938, Chester Carlson invented a technique called xerography which we today call the photocopy technique. Unfortunately no one was willing to invest in his invention, and many big giants like IBM, GE, RCA and others decided not to finance this invention.