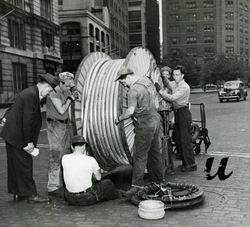 The first telephone lines were overhead lines and were typically placed on telephone poles.Those lines were single grounded wires made of iron or steel.

As the demand for telephone cables increased, more telephone cables were needed to replace the large number of aerial wires present in the cities. In the 1880's the major telephone cable concerns were noise elimination, waterproofing and fitting more wires in each cable. By the late 1890's telephone and electric power cables were laid underground in conduits made of creosoted wood . Later vitrified clay conduits were developed. The multiple duct vitrified clay conduit became the main type of underground construction used at that time.

Some of the more recent improvements are the use of plastic insulation and the development of coaxial cable which occurred during World War II. Up to 600 conversations could be transmitted over two coaxial cables.