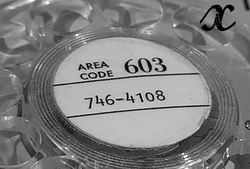 Traditionally, in the age of competing phone companies, each NXX is assigned to one company. Because four digits follow the NXX (digits 4-6), that means available phone numbers were originally assigned to phone companies in blocks of 10,000. However, more recently, NANP has been breaking up NXX blocks into groups of 1,000 that can be assigned to different companies.