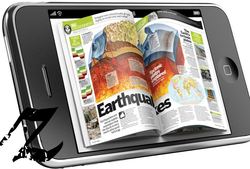 The term “magazine” is said to be derived from an either Arabic word meaning “warehouse” or the French word for “storehouse”. Although specialized journals existed, the magazine had not previously appeared until 1731 with the first publication of the Gentleman’s Magazine. The costs to produce a magazine was daunting. Printing and publishing costs were high and the number of printed copies was restricted due to the inefficiencies of the machinery. Distribution was also a big problem because it was difficult to move large quantities of magazines great distances.

The term ezine is short for "electronic magazine." "E-zine" and "e-Zine" and "zine" are often used interchangeably and are used to describe "small press" or personally distributed magazines or newsletters.

An early use of the term zine first described a new kind of Web site that contained a stylized mixture of content that included articles, pictures, and reader commentary. The zine exploited and celebrated the Web as a new information medium and allowed publishers an opportunity to reach an audience electronically, which proved to be more economical than the traditional print medium.