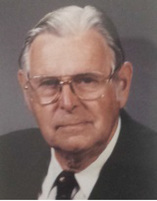 Alderic O. “Dick” Violette entered the telephone business on April 1, 1946 after returning from serving in the Army during WW II.  He started his career at Merrimack County Telephone Company, the local independent telephone company serving the Warner, Bradford and Sutton Exchanges.  His first day was spent running an open wire line from the Plains in Warner NH to Waterloo. He was fitted with climbing equipment and given instructions. In 1959 Dick became Plant Superintendent for a neighboring independent Hopkinton Telephone Company which served the Contoocook Exchange. In 1972 he came back to MCTCo as Vice President & General Manager. He also remained with HTCo and managed both companies. In 1977 the two companies merged and merged its work forces as well. His career spanned over 50 years where he did everything from digging pole holes by hand to running cables and splicing wires. He worked his way up through the ranks to the position of President & CEO of Merrimack County Telephone (or MCT Telecom as it was known then) and he retired in 1986. Dick ended his career as Chairman of the Board of MCT until it was sold to TDS Telecom on June 1, 2002.

Throughout his career Dick collected all sorts of telephone equipment, including phones, tools, books and related memorabilia.  He always had it in the back of his mind that he would like to one day showcase his collection in a museum. The New Hampshire Telephone Museum Inc. was formed on May 10, 2001 and construction began on the museum building in 2003. In 2005 the Museum opened its doors during the Annual Warner Fall Foliage Festival and had over 500 visitors in that weekend alone.

Since then, the museum has hosted over 26,000 guests from all parts of the country and world. It features well over 1000 artifacts from Dick’s collection, and 65 pieces from the collection of Gary Mitchell, one of Dick’s telephone counterparts from the Woodbury Telephone Company in Woodbury CT.  Since opening we have received numerous other donated items from the public.

Independent Telephone Companies came about primarily after Mr. Bell’s exclusive patent rights expired in March 1893. The Bell System Companies continued to grow in the cities and urban areas of the United States, however, there was not a lot of incentive on their part to provide service in the much less densely populated rural areas. This opened the door for small independent companies to start telephone businesses of their own. A good example is Merrimack County Telephone Co. that formed and became incorporated in 1896 to install and serve lines in Bradford, Sutton and into New London. With additional stockholders becoming interested, the company expanded into Warner and parts of Newbury, Webster & Salisbury.

During the 1920’s and into the 1930’s there were as many as 10,000 independent companies serving approximately 60% of the nation’s land area. As time moved on many sales and mergers occurred and the number of companies grew lower. Today there are nearly 700 independent companies providing “land line” telephone services and these companies also provide many other modern telecommunications services, such as voice; data and video.

The Bell System began shortly after the patent for Mr. Bell’s invention in 1876. Beginning in the Boston Area (which is where Mr. Bell was located) the services quickly became wanted by businesses and residences as well.  The National Bell Telephone Company, headquartered in Boston, became New England Telephone & Telegraph Company in 1893. Later the American Telephone & Telegraph Company (AT&T) became the mother company of all the Bell Companies and AT&T became the primary interstate long distance carrier; it also bought Western Electric from Western Union to become its primary manufacturer and supplier; and it established Bell Laboratories (Bell Labs) to perform all of its research & development and to be the leader in technology advances in the world.

After many years of investigation and litigation by the Anti-Trust Department the U.S. Government, a divestiture of AT&T and the Bell System was ordered and it took place on January 1, 1984. U.S. Judge Harold Greene supervised the “break-up”.  Bell Operating Companies were realigned into Seven (7) Regional Companies and gained the nickname of “Baby Bells”. AT&T retained the Long-Lines, Western Electric, and Bell Labs.

Over time since the break-up many mergers and changes have occurred.